Afternoon Me Droogs and Droogettes
15 minute break towards the end of the day with the Dolts.

Some of you yesterday commented on how it ain’t so bad.  Y’all are right to a certain degree.  I -am- ostensibly at the house…  and I’m most certainly not dealing face to face with these motherfuckers…

Although I don’t give a plugged nickel for the (((manager))).  I see that cunt crossing the street I’m aiming my truck straight for her to make her into a hood ornament.

Still, OK… works out, and I’m gonna hit this for a bit.  The worst part about the day is the –hunger- factor.  Even tho I eat in the morning, the ‘boredom appetite’ is running strong.  Gotta start doing something as the gym is closed and I’m getting fat(ter).
So the News about the Aircraft Carrier and Capt. Crozier:

Not really sure as to the timeline on this one…  According to what I pieced together, The Captain did a couple of fucked up things, for which he was throw under the keel hard.  BUT that being said, I’ll list the evidence I’ve got, and go from there:
Fucked Up Shit in Fuck Uppedness:
1) Stopped in “The Nam” and let the crew have onshore liberty when Vietnam was fully infected w/CoronaChan.  Not smart.  Plague on shore?  Suuure… let the swabbies run amok and fuck the locals.  Bad move. (However, codicle to that in a few)
2) Wrote a letter.  Bad move.  Pen-to-paper… even in email… That’ll ding ya.  Can you say “Permanent Record?”
3) Jumping the Chain of Command?  The death knell of your career.  He’ll be lucky to keep his retirement if they decide to Article 32 his ass.  Apparently his CO lived two cabins down from him. (More on that in half a tik)

Now, On the other hand, Good Things That He Did:
1) Took care of his crew.  Pretty much didn’t think it was worth having everyone sick on the boat.. we saw how shit goes sideways on a Cruise ship, and they tend to be a lot cleaner than a Navy ship, what with hot bunking and such. (More on THAT particular bit later too)
2) Asked for help.  Now this’s where I have an issue:  His boss (CO) lived two doors down.  I have serious trouble believing that he didn’t talk to him.
3) Hasn’t uttered a word since this whole fuckfest started.  Amazing in many respects (unless they got him under lock n key in Norfolk)

OK:  Now, the Big Country Analytical Grey Matter sez this:
The port call in Nam… Yeah, ostensibly its the Captain of the ship’s call.  However, having been in and around the military for 35+ years, there ain’t no way in fuck-all that Crozier didn’t ask the Commodores opinion on shore leave.  See, shore leave for the Navy is usually the most dangerous of times for a CO outside of combat.  Drunk sailors, fighting sailors, looting, raping, pillaging… all that can fuck up the CO as bad as it fucks up the crew and the offenders.  So my guess in the zero-defect fucktard Navy?  He asked and was told it was OK to let the crew off the boat, bringing back more than crotch critters.

So… a week goes by, and dudes start getting sick.  Probably really sick as they didn’t have a way to test, which means motherfuckers were prolly falling out.  I mean, no test kits on the boat (as of last word, 300 mf’ers got it including Crozier).  Now, to those of you who don’t know or are unfamilar, the Navy practices a nasty funky foul and disease vectoring thing called “Hot Bunking.”  Which means that the boat ain’t got enuff beds for 5000+ motherfuckers… so they share.  Literally as one dude gets out of a rack (bunk), the next dude getting off shift is getting INTO said nasty sweaty foul stinky bunk…. and it can be 3 dudes b/c 3-8 hour shifts (go Navy… NOT) 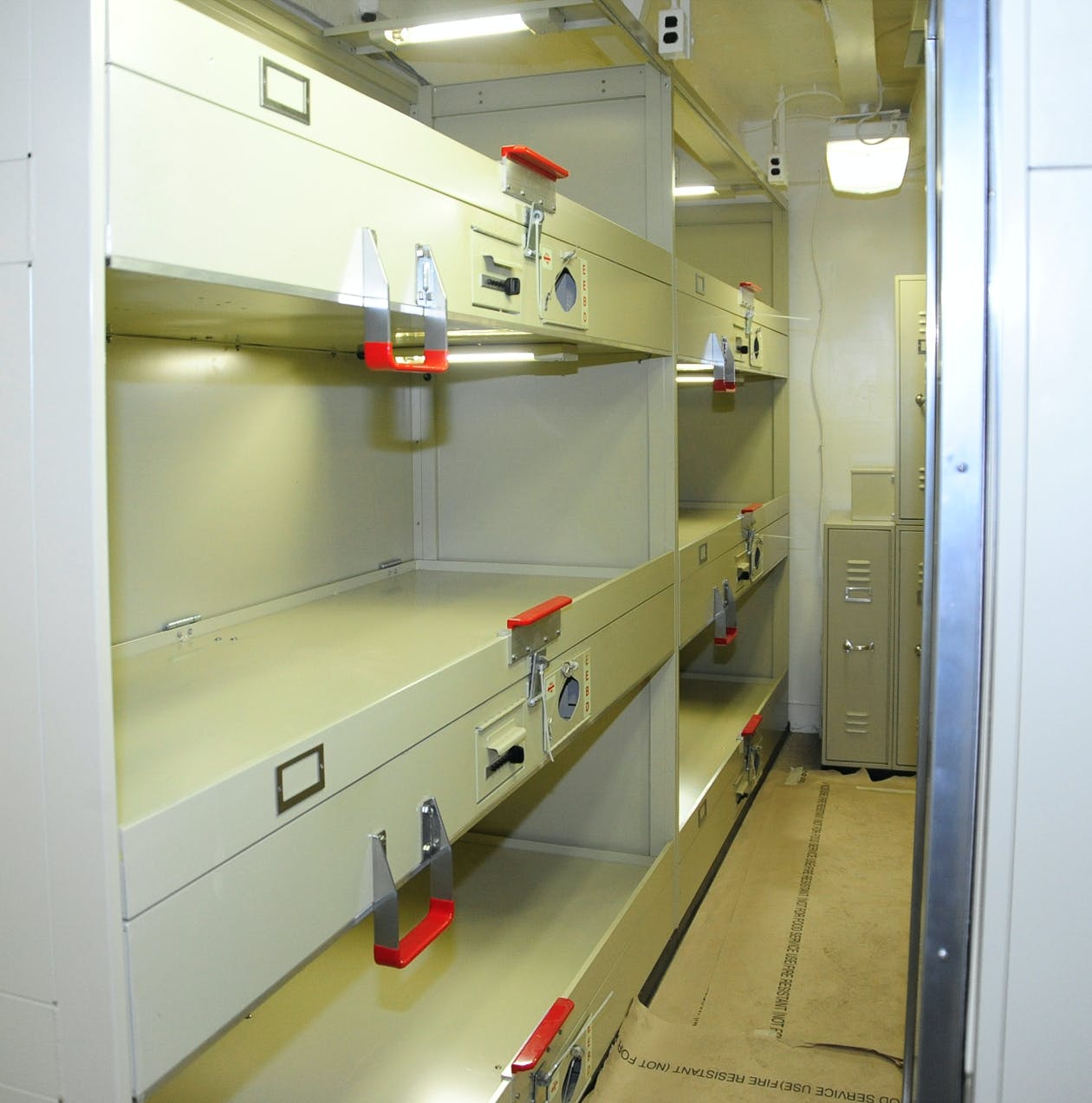 That’s one side of a 12 Bunk “Berthing Area” on the Roosevelt…  3 men per bunk… times 12 bunks… 36 dudes all sweating farting and sleeping in INSANELY close quarters.

THIS is a main reason for going Army instead of Navy… give me a nice, soft patch of mud, lined with pine needles anyday.  My guess?  The Captain, when the report got to him that dudes were falling out all over the boat (they’d had to have been… military folks don’t slow down when on Ops… I know of what I speak… had walking pneumonia during a field problem and only got treated when I passed the fuck out). So the Captain gets word of the crew significantly getting ill and probably went to the Commodore and said something to the effect of :
Crozier: “Hey Boss, heap bad Ju-Ju.  Need to make port.  Crew sick.  Getting worse”
Commodore: “Crew fine.  Would make me look bad.  Fuck up my promotion.  Crew can suck it up. No port.  Fuck it, drive on.”
Crozier: “Seriously… crew fucked.  Not feeling good myself. Plague going on. Bad Ju-Ju.”
Commodore: “Take Motrin.  No port call. Deal w/it.”
Crozier: “…..”
In fact, I got a strong suspicion he did.  And in said aforementioned suspicion, said CO told him “Nah, it’ll be fine!” and to STFU over this whole thing.  And the fact that said-Commodore has been conspicuously absent from being named ONLY reinforces my belief that he’s probably an Obama Era Ass Covering Perfumed Prince Fuckstain (which I’ve now read/heard from a few of my dot mil sources as being correct… he’s a ratfucker…) who’s worried that if the ship went in and ‘down sick’ it’d reflect badly on him.  So he denied ever talking to Crozier and put him under the bus… ’cause PROMOTION!!!  Can’t be fucking up this assholes ride to the E Ring in the Puzzle Palace…

Which is EXACTLY what happens in the modern dot-mil…ESPECIALLY in the fucking Navy…  a more fucked up group of misfits and malcontents with low morale and even lower abilities…  The Navy is truly a sponge-spine outfit compared to the Navy I grew up with.  Asskissers and Coverers.

So, to finish, Crozier, realizing the close proximity of his men in the living areas, the probable reports he was getting (and the fact he probably was feeling like ass hisself) jumped the Chain of Command and said “fuck it.”

Now, because of the circumstances I have outlined above, I can see why he did it…

Don’t necessarily AGREE on HOW he did it… I mean he used a bullhorn metaphorically speaking… the only reason I can think that he did it was that everyone else he went to in the Chain of Command is a ratfucker too.

If that IS in fact the case, then EVERYONE in the CoC above him should be fired, and him re-instated.

Maybe as SECNAV as the position is now temporarily being filled by the Assistant SECAR?

Get -someone- who know what the fuck they’re doing in there… get rid of the Obama Turdlings…
KnowhutImean?
Fuckers.
More Later, I remain The Intrepid Reporter

Fuck you if you can't take a joke. No one gets out alive so eat me.

View all of BigCountryExpat's posts.